Some concrete details of the upcoming Lamborghini Urus SUV have hit the web, following a number of teasers that have so far confirmed things like a fully digital dash, new driving modes, and a V8 engine. 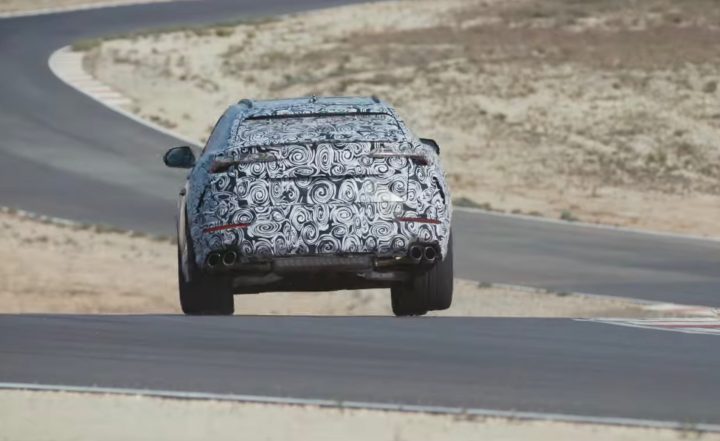 A recent report by Automobile Magazine has uncovered some details after a prototype test drive. It’s reported the Urus will feature a 4.0-litre twin-turbo V8 producing 485kW and 850Nm. It will come in as the only V8 model in the company’s current showroom.

In recent prototype tests by various publications, some have recorded a 0-100km/h sprint in 3.59 in the case of Motor Trend, and as little as 3.34 seconds. Part of this performance comes thanks to a slick-shifting ZF eight-speed automatic and clever all-wheel drive system.

Lamborghini’s ANIMA system (drive modes) includes a few off-road settings for the first time. There’s Terra (land), Neve (snow), and Sabbia (sand), as well as tarmac and track modes. Despite the off-road capability, it seems like the Urus’s on-road handling will be the most impressive element.

After recent prototype test drives, reports are banging on about how well it steers through corners and hangs on with relentless grip. This is likely to mean the Urus will become the quickest SUV around circuits as well. And, we guess, so it should be, being a Lamborghini.

As for the design, it will be inspired by the Urus concept car from 2012. Various prototypes have already been spotted and even shown by Lamborghini, and teasers have shown quick digital depictions of the SUV within the LCD screens inside.

A full debut hasn’t actually been officially confirmed as yet, but with more and more teasers hitting Lamborghini’s YouTube channel over the last week or two, we expect it to happen real soon. Check out some of the highlight videos below.