It doesn’t even look like a practical hatchback does it? But rest assured, this is the all-new 2019 Mazda3 G25 GT. Look how suave and stylish it is. Mazda is clearly going for a higher end of the market with this one. 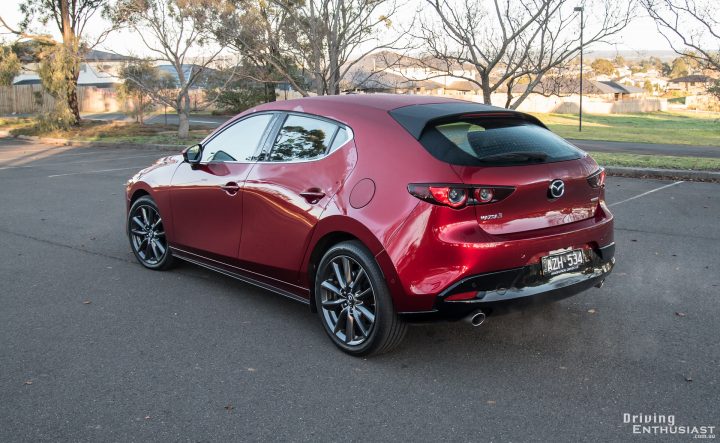 The all-new Mazda3 is based on a modern SkyActiv platform that sees external dimensions shrink slightly compared with the old model. As a result, the interior seems to have shrunken a bit as well. Maybe this doesn’t matter because it looks so darn sexy?

Specifically, the overall length drops 10mm, to 4460mm. The width remains unchanged at 1795mm, and the height is reduced by 15mm to 1435mm. Fortunately, the wheelbase has increased by 25mm to 2725mm. With an increased wheelbase comes more dynamic proportions, and the front and rear wheels are pushed further outward to improve handling.

Two engine options are presented in Australian showrooms, with a third ‘Skyactiv-X’ unit coming later this year. There’s the ‘G20’ which uses the same 2.0-litre petrol as before, generating 114kW and 200Nm, and then the ‘G25’ which also carries over the previous 2.5-litre petrol, generating essentially the same 139kW/252Nm (actually up marginally, from 138kW/250Nm).

What you see here is the auto G25 hatch in GT form, which is the second from top, below the Astina G25. Prices kick off from a surprisingly high $34,490. That’s up considerably on the old SP25 GT auto hatch that started from $26,990. Is it worth the price climb? Let’s dive in and see. 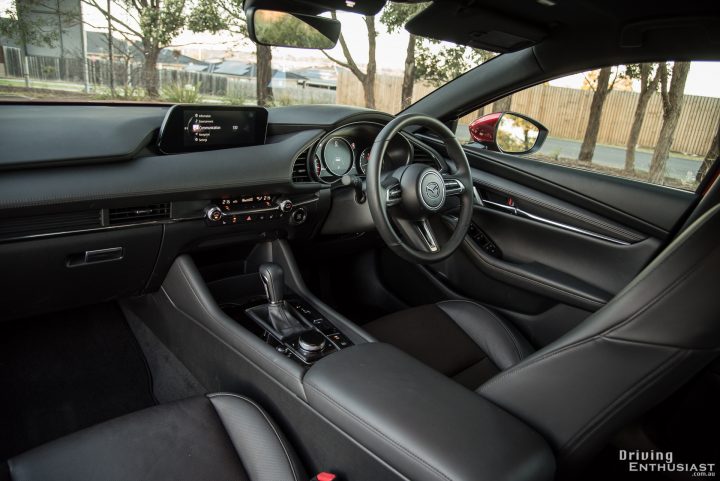 The new model does come generously equipped. Even though the GT is right near the top of the range, you will be blown away by just how much stuff is packed in here. For starters, all models now come with an 8.8-inch media screen on the dash that presents awesomely crisp graphics and one of the best control systems in the class.

Down on the console Mazda has evolved its MZD Connect hand controller setup – now called Mazda Connect – bringing in a larger rotary dial and reduced the surrounding button count from five to four. The favourites buttons (highlighted with a star) is moved away from the main control cluster, making the unit slightly more digestible. Not that it’s overwhelming in the first place. It’s like the first time you used an iPad. Yes, it does take some time to fully get used to. But once you get used to it you’ll be surprised how you ever lived without it. 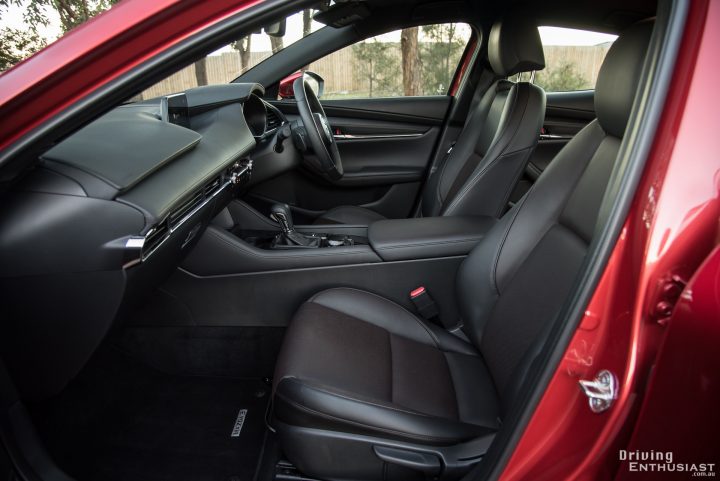 Mazda now embeds Apple CarPlay and Android Auto as standard, and says the updated interface offers enhanced system performance. It boots up faster than before and the functionality is more intuitive, the company says. We completely agree. It is one of the best systems on the market in terms of graphics design, menus, and operation.

Tech gizmos have also be enhanced for the driver. Peering through the three-spoke sports steering wheel – that falls perfectly into your hands by the way – is a new TFT instrument cluster. We love that it is presented in a traditional mechanical gauge theme. This is a testament to the super-fine graphics. A wide-screen head-up display is also now standard on all models. And it’s not the old tacky plastic card that flips up; it’s a proper projection onto the windscreen.

Like most new Mazdas the interior is built with acclaimed quality and attention to detail. All moving parts feel robust yet they have a distinct soft-close or soft-touch character, and the design of the entire concoction is just beautiful. You won’t find a better driving position in the segment, and there’s a height-adjustable driver’s seat and fully adjustable steering column. 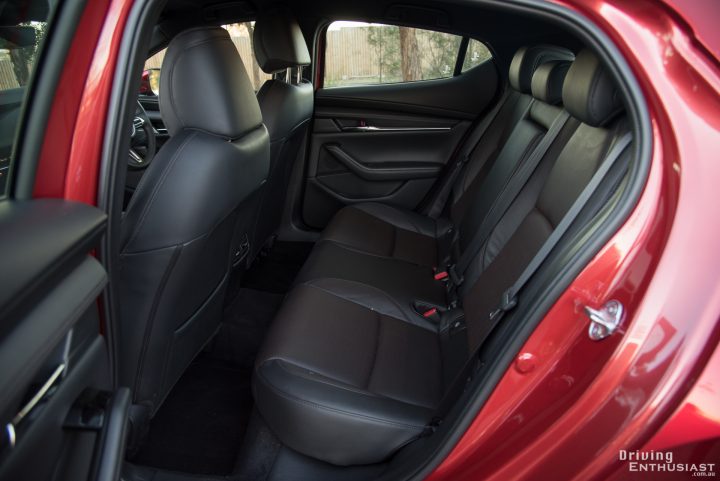 About the only thing that lets the interior down, and it’s a pretty bad one, is the space. Despite the increased wheelbase the seating room feels quite cramped and even claustrophobic. This is particularly the case for the rear passengers. The rear doors, as in the metal panels and not the window element, rise right up towards the rear. It feels like a coupe and offers a thick blind-spot like one as well. Not much outside light is given access to the cabin either. It’s cosy, we’ll give it that. Headroom and legroom is only moderate for the class.

In related news, the boot space has reduced from the previous 308L to 295L. Ok, it’s not much. But why is it reduced at all? If anything Mazda engineers should have been tasked to increase this space. That’s what this segment is all about, surely? Not helping here is the fact that the new model is available with all-wheel drive in some markets. Problem is, the platform isn’t really adjusted to suit FWD-only. Stick you head under the car and you’ll see big indents where a rear diff would go. And there is a transmission tunnel running through the rear seat area, eating up middle seat legroom considerably.

So, it is all worth the price hike? We think the new G25 GT is miles ahead of the old model in terms of equipment and technology, but this does come at a big price premium. There are many sporty rivals on the market at the moment that you can get for under this model’s $34,490 starting price, and they come very similarly equipped. 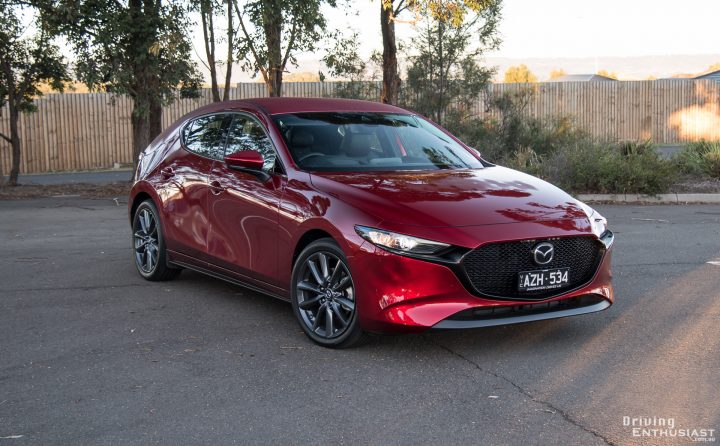 Mazda has fitted its latest generation Skyactiv G-Vectoring power delivery technology to the new model. It may sound like marketing jargon but basically it uses torque-vectoring-like power management, helping to drive the outside front wheel around corners. What does this mean exactly? Well, it means you can apply loads of throttle mid-corner and it will pull you around with utter conviction and stability.

As usual, the suspension is spot-on for ride quality and sportiness. It’s not too firm or too slack. Instead, it provides that desirable sweet spot in between. And this is great for Aussies as some of our roads are shiat. Bumps don’t really upset the car or your passengers, and tracking around corners remains precise. Tie that all in with a responsive and communicative steering system and you’ll left with one of the most enjoyable cars in the class in terms of handling.

We are a bit disappointed to see Mazda has switched from a multi-link independent rear suspension configuration to an old-school torsion beam arrangement for the new model. However, in reality it doesn’t seem to have made a negative impact. It feels every bit as capable as the previous model, if not more capable in faster sweeping bends.

Another minor disappointment is the engine. Yes, naturally aspirated engines are very cool these days. They are usually the more likeable underdog to the increasingly-popular turbocharged units that are popping up. But Mazda hasn’t really done much at all for this 2.5L, compared with the old model. With such a significant model jump we were expecting some decent upgrades. The engine produces 1kW and 2Nm more than the old engine, and that doesn’t seem to offset the 45kg tare weight increase over the old model.

Flat-out acceleration is a bit lacklustre. And that’s part of the problem. Unlike turbo engines which provide a wide spread of torque and sometimes power, this linear naturally aspirated engine offers its peak torque at 4000rpm, and peak power at 6000rpm. If you’re not up around the 4000rpm mark, you don’t get much leeway or support to make swift overtaking moves, or to jump up to big speed limit changes. Not without revving the guts out of it anyway. 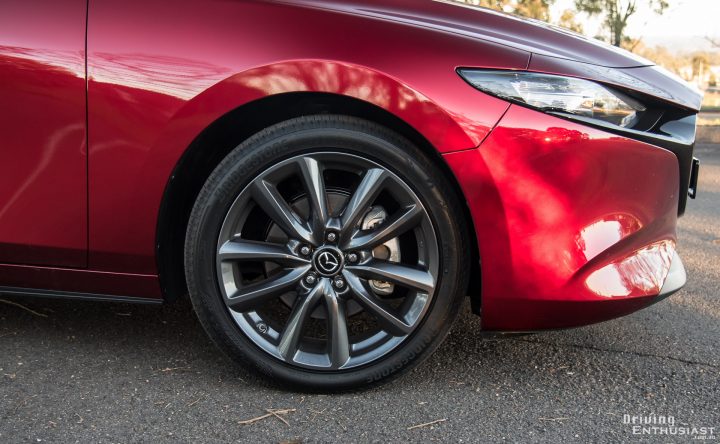 The new Mazda3 is definitely a good-looking thing. There’s no doubt about that. And the interior is beautifully presented and built with a high attention to detail and with quality materials. The level of standard kit is also increased over the old model, but so is the price. By some $7500 in the GT’s case.

But the practicality is what tarnishes it mostly for us. It’s also a crying shame the same engine carries over from before, but now it has 45kg more weight to lug around. If there was ever a desperate call for a new MPS version, now is that time. 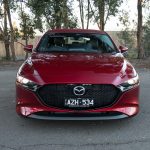 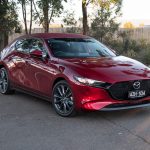 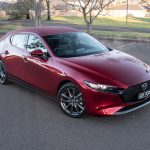 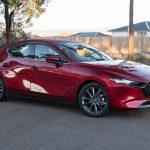 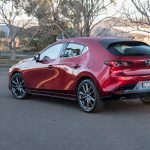 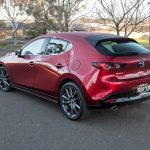 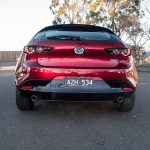 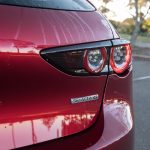 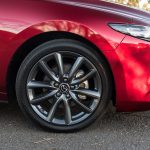 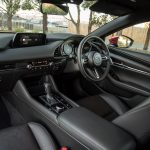 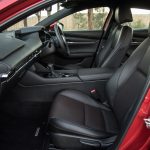 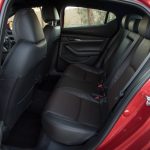 Look, there are some very appealing aspects to the new Mazda3, such as the big advances in features and interior quality. The design, inside and out, is also near or at the top of the class. Unfortunately our overall score is a bit lower than what you might expect and that’s because it does fall short in our specific marking areas, compared with the rivals and the predecessor. If design was part of our marking, the final score would be much higher.