A teaser has dropped for the 2019 Dodge Challenger, previewing the next instalment in the chapter of America’s most ballistic muscle car. Entitled RED797_62818, this label could provide some clues to the power output and release date – 6/28/2018. 797 is the expected horsepower output (571kW), which is just shy of the SRT Demon’s 808hp (603kW). 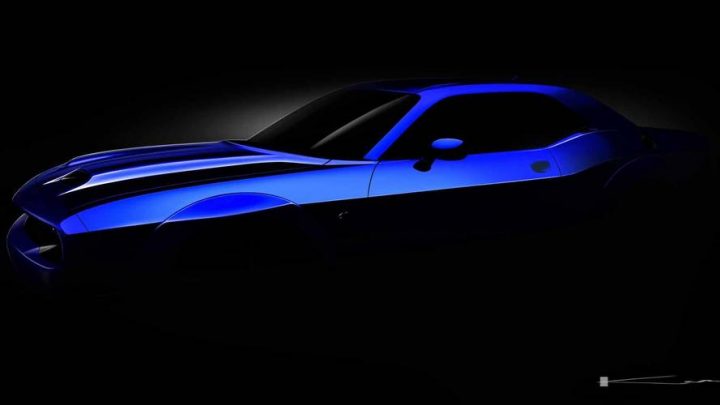 As with the current SRT Hellcat, the higher power levels are expected to be unlocked via a secondary red key, with the black-coloured item dropping power to more sedate levels for regular driving conditions.

Other variants to use the supercharged powerplant from the Hellcat include the Jeep Grand Cherokee Trackhawk, and the upcoming Ram Rebel TRX that aims to dethrone the all-conquering Ford F150 SVT Raptor.

A previous teaser (pictured above) has revealed a new blue hero colour and some minor exterior revisions, including double bonnet scoops. Beyond this revised model, FCA chief Sergio Marchionne has previously indicated that plans to migrate the Challenger to the Alfa Romeo Giorgio platform have been abandoned, in favour of a heavily revised versions of today’s LX-based cars.

Less weight and efficiency gains are expected, but these have reportedly been pushed back as far as 2022. Marchionne said the Challenger, as well as its four-door Charger sibling, would have to be “uncrecognisable” compared with today’s versions to justify the investment.

Will a Hellcat version still be viable in the 2020s? We hope so but we’ll have to wait and see. Take a look at the preview below for more.