While the 992 Porsche 911 has been revealed in various forms, the screaming 2020 Porsche 911 GT3 992 is yet to appear. A spy video has just surfaced online showing a prototype screaming around the Nurburgring, previewing its insane speed and track performance.

The first thing you’ll probably notice on the prototype is the huge rear wing that features big vertical fins. This aparatus no doubt helps to provide downforce for the rear end, but the vertical fins would also help to improve straight line stability at high speed. 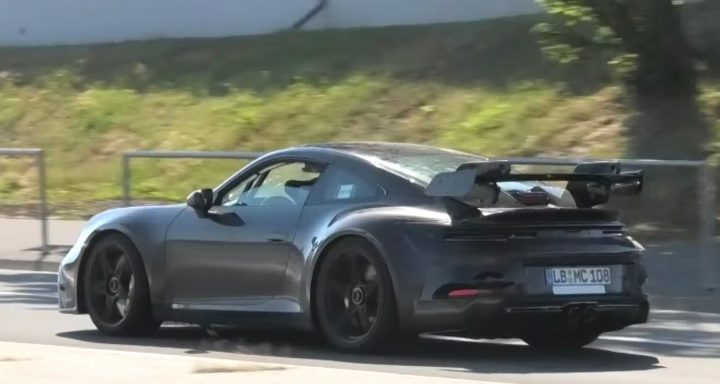 Below this you’ll see the new-look 992 full-width taillights, and just above there’s a sneaky lip spoiler that runs along the upper edge. The rear bumper bar doesn’t look quite finished yet as there seems to be some unusual bumps in the corners. But the twin centrally-mounted exhausts are likely to carry on tradition for the GT3.

Around at the front it looks like Porsche might be fitting one of those racing car air extraction vents on the bonnet. The prototype is seen wearing a suspicious cover in this area. In race cars this vent provides relief from air being scooped up in the front bumper, and the release actually provides downforce for the front end. 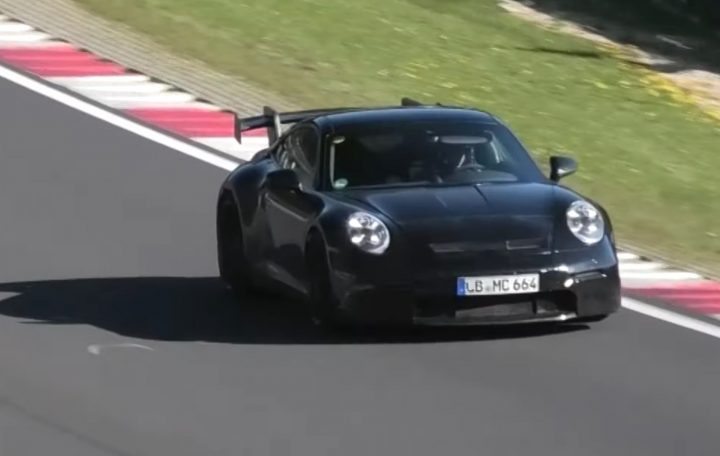 In terms of the propulsion unit, Porsche is expected to continue on with a 4.0-litre naturally aspirated flat six for the new GT3. Many car manufacturers are turning to turbochargers to improve emissions and economy, and even Porsche now uses turbo engines for the rest of the 911 lineup.

Seen as though the GT3 is an elite model part of the GT group of vehicles though, we’re sure the company will want to stick with tradition here. Naturally aspirated engines are known and celebrated for their natural throttle response and linear rev range, with on-the-limit driving only achieved by maintaining high revs.

Judging by this prototype, it seems fairly obvious that this uses a non-turbo engine. It’s seen screaming around the Nurburgring, emitting that trademark high-pitch howl. The 4.0L unit will probably be revised and could offer around 400kW, up from the current 368kW (383kW for the GT3 RS).

You can hear this prototype does feature a rapid-changing dual-clutch auto transmission. However, a manual option may be offered like in the current model. Porsche has been in the media recently expressing that it wants to keep naturally aspirated engines and manual transmissions for as long as possible. We’re sure hardcore driving enthusiasts will appreciate this.

A debut for the new model is likely to take place later this year. Australian pricing and specifications are expected to be announced at the time of the unveiling. Check out the spy video below to see how she goes so far.