Love it or hate it, the styling of the 2019 Toyota RAV4 is certain to make an impact on the medium-size SUV market. Just look at it. It’s the most macho version yet. 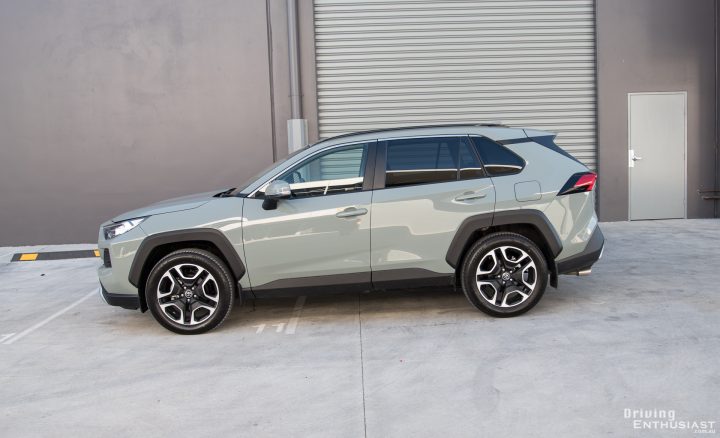 This is the all-new Toyota RAV4. And it really is all new. Underneath you’ll find the Toyota New Global Architecture (TNGA), which you’ll also find beneath the latest Camry and Corolla. And in those cars the driving dynamics are significantly improved over their predecessors. In other words, the fresh platform is very good news for the RAV4.

Toyota Australia is offering four different variant levels for the new model. The lineup kicks off with the budget-spec GX, and then goes up to the GXL, the Cruiser, and at the top this variant you see here, the Edge. Avid RAV4 fans will remember the Edge badge from RAV4s of yesteryear. For the 2019 model, the Edge is more exclusive than ever, coming equipped with an exclusive engine and matched to an exclusive eight-speed auto – all other variants come with a CVT auto.

For the first time for the RAV4, all variants are available with a hybrid engine. Well, except for the Edge. Yep, we’re liking this Edge more and more. Prices start from $30,640 for the base GX, and from $47,140 for the Edge (before on-road costs). It ain’t the cheapest SUV in the class but it’s not the most expensive either. And really, the Toyota badge is worth a bit of a premium over the rest, surely? 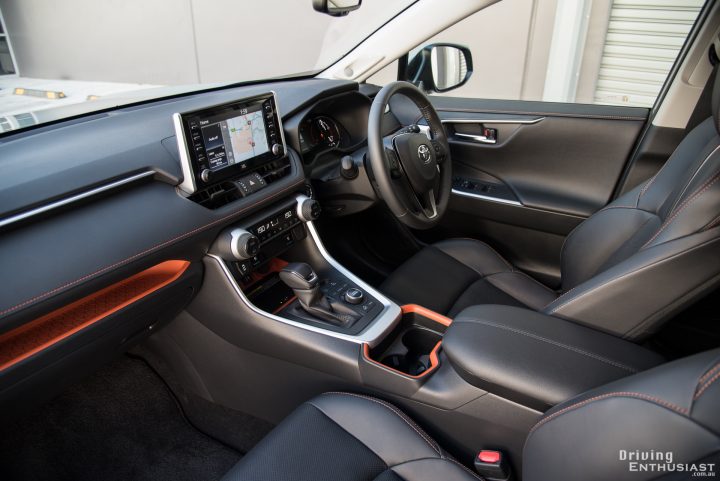 Forgetting about the Edge, the standard RAV4 GX comes with more stuff than you would ever expect from a base model. There’s an 8.0-inch touch-screen media system packed with digital radio, Bluetooth, a rear-view camera, and even sat-nav. And that’s just the base model. There’s also USB and aux-in ports, and a 12-volt socket. Moving up to the GXL (and anything above) includes five USB ports (yes, five), including four fast-charging ones, as well as wireless phone charging. Again, that’s just the GXL. You wouldn’t see this level of connectivity in some premium cars.

As for the Edge. It’s a bit ironic actually. Due to the fact the base models come with so much stuff, it’s almost a case that there’s nothing left to add for the flagship. You do get bespoke sports seats in the front with orange stitching, as well as some orange storage trays on the dash, which actually come in handy, and a thumping JBL nine-speaker stereo with a sub-woofer in the boot (shared with Cruiser variant). Instead of focusing on creature comforts though the Edge presents unique hardware beneath the skin.

Up front you’ll find Toyota’s latest ‘Dynamic Force’ 2.5-litre four-cylinder petrol engine. It generates 152kW at a screaming 6600rpm, and 243Nm between 4000-5000rpm. This is matched to the only eight-speed auto in the range as mentioned. For the rear differential Toyota has implemented torque vectoring for better control, and drivers can select from a series of special driving modes including mud, sand, rock, and snow. Some black plastic cladding is applied to the lower parts of the exterior for that rugged look, and a skid plate is added under the front end. 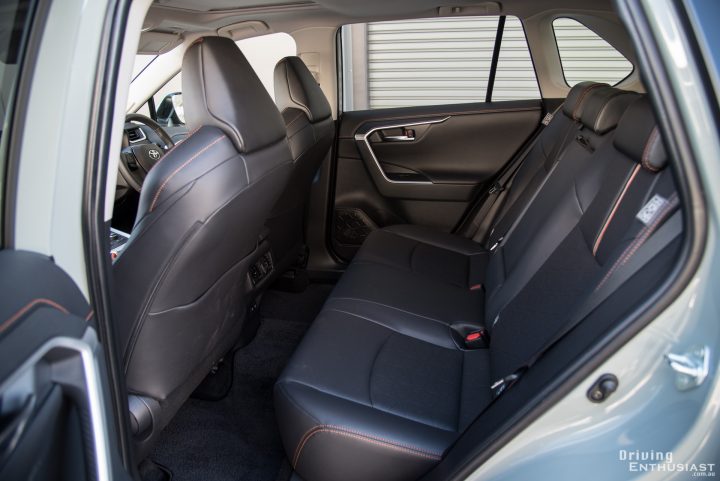 The Edge variant is a little bit fun. It has orange highlights inside for Pete’s sake. That’s as raunchy as the RAV4 has ever been. No but in all seriousness, the RAV4 Edge is surprisingly enjoyable in the corners. That TNGA underneath really is a well-sorted platform. Many SUVs in this space start to feel a bit uncomfortable when you try to tackle bends with some vigour. But with the RAV4 we notice you do need to push quite hard before this happens.

Understeer is withheld for quite some time, and in-corner stability is excellent. It will also change directions swiftly and without complaint, with superb body control resulting in minimal roll. Keeping in mind the RAV4 Edge features 19-inch alloy wheels that wear 235/55 tyres – they aren’t exactly low-profile performance tyres. Yet despite this, the RAV4 will more than live up to your expectations, especially in comparison to the rivals.

Rotating the sporty three-spoke steering wheel down a string of tarmac spaghetti is something you can look forward. In that sense, it encourages you to get out on the weekend, grab the kids and your other half and escape to the wilderness at every chance you get. As a driver, you can smile your way to the destination, while the passengers take in the sights and surroundings. 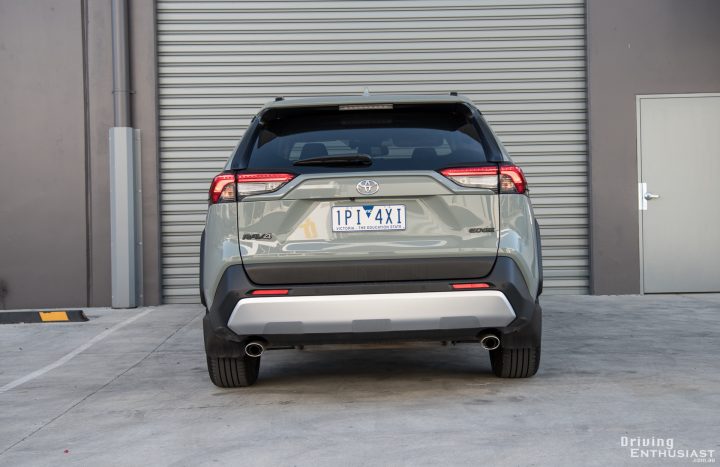 Performance isn’t exceptional. With 152kW on tap it doesn’t set any new benchmarks in this class. Although, it’s not the weakest engine either. We timed a best 0-100km/h of 9.3 seconds. It’s a respectable time but not a desirable or aspirational time. What is more of a let down is the low torque compared with many of the turbo rivals. And then the peak power isn’t reached until 6600rpm. That’s some high revs. Unfortunately, it doesn’t produce a nice soundtrack either. This thing screams like Jimmy Barnes, after he’s just stepped on a nail.

Instead of performance though we find this SUV fun because it does have an exciting and likeable character. The orange bits inside and the rugged new design makes it seem adventurous, even if you only ever drive it to work. You constantly feel like you could smash some dirt tracks at any time you wanted to.

With 195mm of ground clearance and a clever all-wheel drive system the RAV4 Edge offers real off-road capability. You can actually smash some dirt trails and spray a bit of mud up the sides if you want to. So many rivals pretend to be off-road capable. But in reality, they are often too low to the ground or come with low-profile road-suited tyres, that they’d struggle to conquer much more than a groomed dirt road. 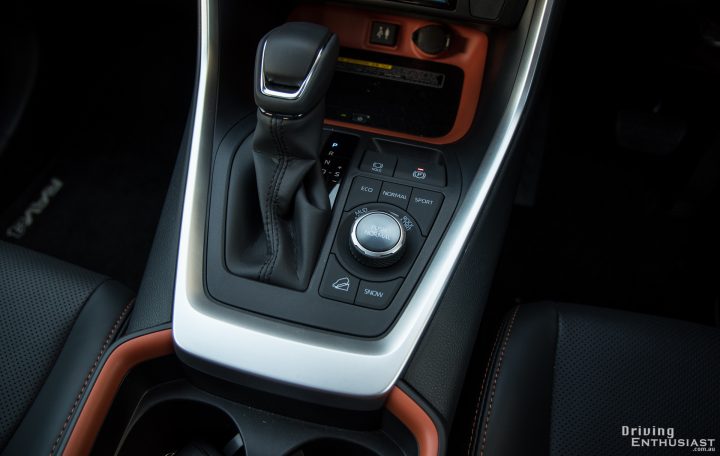 We’re not completely convinced you need to make the stretch to this $47,140 Edge variant. The regular variants of the new RAV4 are worthy of high praise in almost every way. And we’re talking in comparison to this specific market. Sure, the engine sound isn’t very nice and mid-size SUVs are a bit boring in general.

But if you’re looking to buy one because you want a practical, reliable and well-featured model that has real potential to fulfil your adventurous side, you simply must check out the new RAV4. It blows a lot of the competition out of the water in these departments. 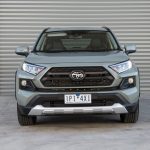 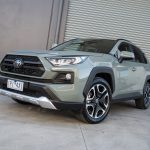 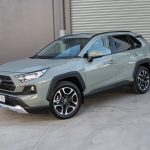 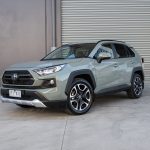 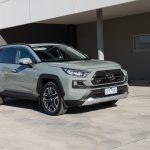 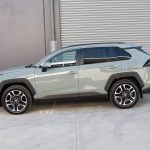 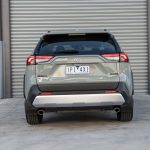 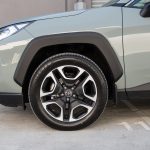 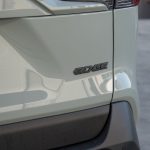 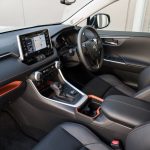 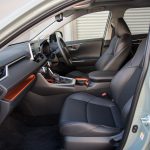 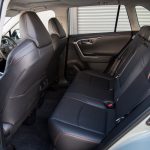 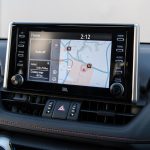 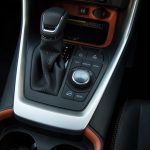 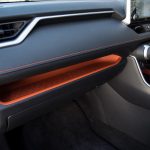 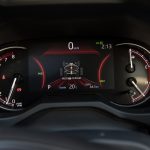 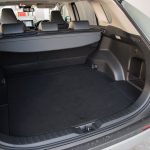 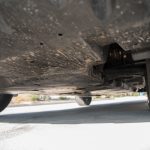 We do really love the RAV4 Edge. We’re not sure everybody in this class will be willing to spend up to the Edge, but we think it does provide of point of difference against the common rivals. It’s adventurous, ridiculously well-packaged, and comes with some real off-road credentials. Toyota’s renowned reliability is also hard to argue with.