You’d have to say the Toyota 86/Subaru BRZ is one of the most genuine cars designed for driving enthusiasts. It keeps the passion alive for the traditional rear-wheel drive, manual-transmission sports coupe. But, it has been out for around six years now. Is it still a highly desirable driver’s car? 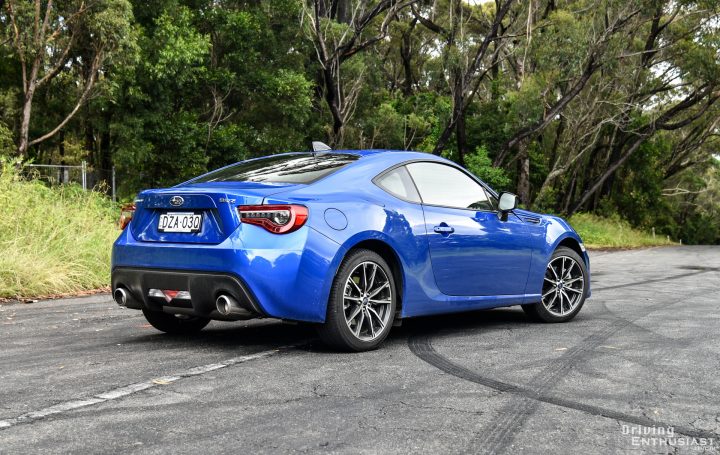 The Subaru BRZ is a two-door, four-seat sports coupe which has been developed in partnership with Toyota. They are both produced by Subaru at its Gunma Main Plant in Japan. Both the Toyota 86 (aka GT86) and BRZ share the exact same underpinnings and body panels, and the same powertrain. Only minor differences are made for the interior and some of the standard features. They also showcase unique alloy wheels.

This example we have here is the mid-spec Premium variant in Australia, sitting between the base BRZ and the BRZ tS. It comes with a few luxuries inside, although it retains pretty much the same look from an external point-of-view as the base model. In that sense, some buyers might be a little disappointed that it isn’t immediately obvious they have splashed out and bought the Premium. For the full show-off factor, the tS presents a bespoke STI-developed aero kit and BBS alloy wheels.

You can opt for a six-speed auto, but what you need is the six-speed manual as it is a lot more fun. Prices start from $36,030 for this Premium manual, with the auto requiring a $2000 premium. 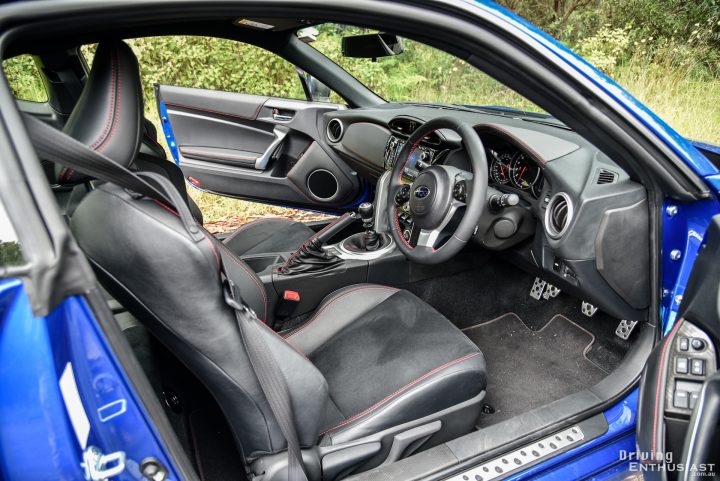 Going for the Premium variant gets you a few luxuries and frills. You’ll be pleasantly surprised by the leather-accented sports seats in the front, which feature Alcantara-like inner trims to help hold you in. These feature heating functions as standard. There’s also dual-zone climate control, some cool toggle-like switchgear, and a full 7.0-inch touch-screen media interface.

The touch-screen comes with GPS sat-nav, a rear-view camera, and adopts Apple CarPlay and Android Auto technology. This latter connectivity service isn’t featured in Toyota’s version. It essentially means you can mirror some of your phone’s apps up onto the screen, so there’s no more fiddling with your phone while behind the wheel.

In the engine compartment, all three variants feature a 2.0-litre naturally aspirated four-cylinder boxer engine. Toyota supplies its D-4S dual injection technology, while Subaru takes care of most other areas. The engine runs at a high compression ratio of 12.5:1, requiring 98 RON petrol, and generates 152kW at 7000rpm, and 212Nm through 6400-6800rpm. 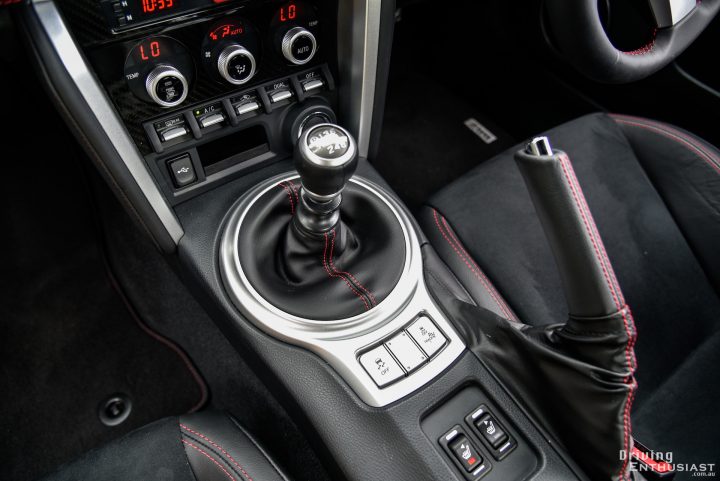 This is an area where the BRZ scores very highly. There are plenty of sporty cars and hot hatches that promise to be fun and capable. The BRZ is on a different level. Simply meandering around town doesn’t do it justice. This is one of those cars that can be pushed, really hard, and it’ll keep giving and giving.

Around bends it is perfect. There’s no other word for it. The mechanical power steering turns exactly where you tell it to, and there’s always very clear communication coming back through the wheel. It almost feels like the wheels are an extension of your limbs; it’s that in touch with you. But not only that, the capability is astounding.

Accelerate up to a corner, jam on the brakes, tuck the nose in, and then apply generous doses of throttle and the standard limited-slip diff will hook you around and whip you out of the corner like it didn’t even happen. And if you’re skilful or game enough, you can switch off the stability control and drifting becomes your new favourite pastime. This thing will drift all day long. Subaru has even fit a ‘Track’ stability control mode which allows some slip, which is great for emerging drivers. 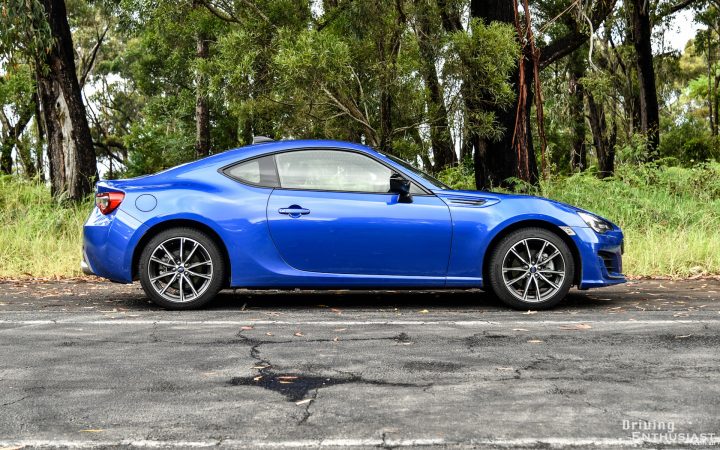 Subaru has fit 215-wide tyres on the rear. That’s narrow. It’s almost like the car has been set up to drift in the first place. And since the engine isn’t overly powerful, complete control can be maintained very easily. So, yes. This car can be extremely fun to drive. Using the manual transmission obviously helps with overall engagement and driver satisfaction as well.

Are there any downsides, or anything that kills the fun potential? Not really. About the only thing we can think of is the engine sound. Because it is naturally aspirated and it is a boxer engine, the sound can seem a bit rough and coarse. And there are some vibrations felt at certain parts of the rev range. It would be nice if Subaru offered a turbo version as it could provide a more refined and deeper soundtrack. 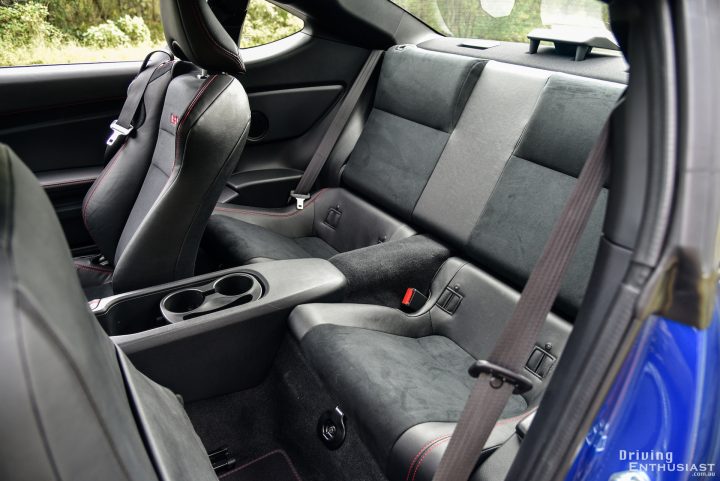 If all you want from a car is pure enjoyment during near-the-limit driving, the BRZ is a no-brainer. It is a purpose-built machine for driving enthusiasts. Rear-wheel drive with a manual transmission, and an excellent chassis and suspension setup. What more could you need? In fact, this is ready to go racing if that’s what you want to get in to. The price is also very reasonable for the kit you get and the skills it brings.

Our main recommendation is; don’t buy this car if you simply want something to pose around in. Yeah, we get it. It’s a low-slung coupe for a reasonable price. But in reality it is so much more than that. It deserves to be driven, and driven hard so you can appreciate its true potential. If you get one, do yourself a favour and get out there and take it for long spirited drives. 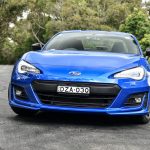 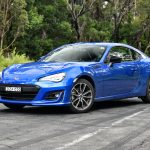 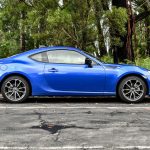 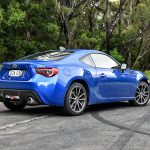 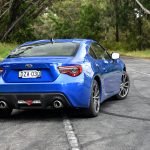 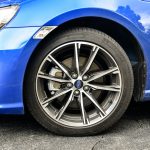 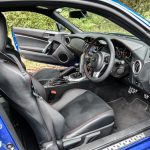 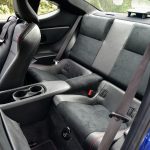 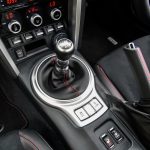 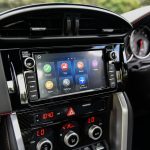 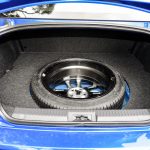 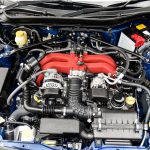 As the local Ford Falcon and Aussie-made Holden Commodore now only exist in the pages of history, the Subaru BRZ/Toyota 86 keeps the candle lit for affordable rear-wheel drive cars. We absolutely love this car, and think it is one of the best things to happen in the new vehicle market in years.