What’s this unusual-looking thing, you ask? It’s kinda cute yet sharp, with hints of premium and luxury in it. Well folks, this is the all-new Lexus UX. It’s the first compact SUV from Lexus, with its eye on rivals such as the Audi Q2/Q3, BMW X1, and the Mercedes GLA. 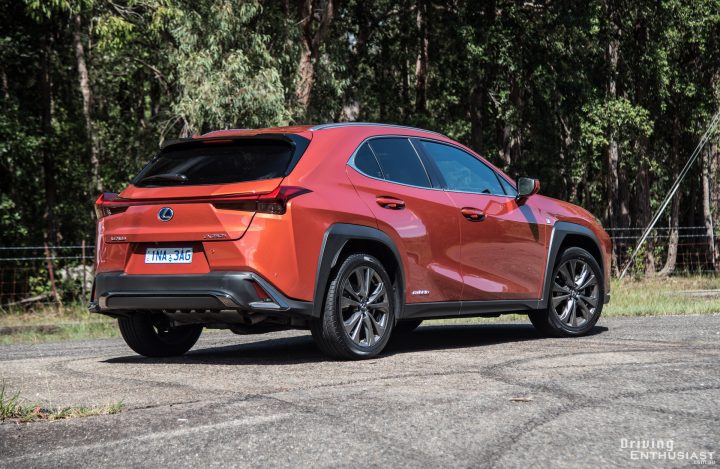 It’s a luxury compact SUV. But more specifically, you can think of the UX as Lexus’s version of the Toyota C-HR. Under the sharply slashed body is Toyota’s New Global Architecture (TNGA), although, Lexus calls its version the GA-C platform.

Measurements read 4495mm in length, 1840mm in width, and 1520mm tall. It also rides on a 2640mm wheelbase. Compared with the Toyota cousin, the Lexus is 135mm longer, 45mm thicker, and 45mm lower, adopting the exact same wheelbase.

Lexus Australia is offering a number of variants for this model. And we mean a large number, as it obviously wants to make sure it has a broad spread to grab a big slice of the market pie. Two powertrains are available; a 2.0-litre petrol (called the UX 200) that produces 125kW, and a 2.0L hybrid which generates 131kW (called the UX 250h). These can then be had in Luxury, Sports Luxury, and F Sport trim.

Most variants are front-wheel drive, except the UX 250h is available with all-wheel drive in Sports Luxury and F Sport guise. Prices start at a very reasonable $44,450 for the base UX 200 Luxury, and soar up to $61,450 for the UX 250h F Sport AWD. What you’re looking at here is the latter. And as you can probably tell by the wideness of your eyes, this is quite an expensive option, going for the top model. 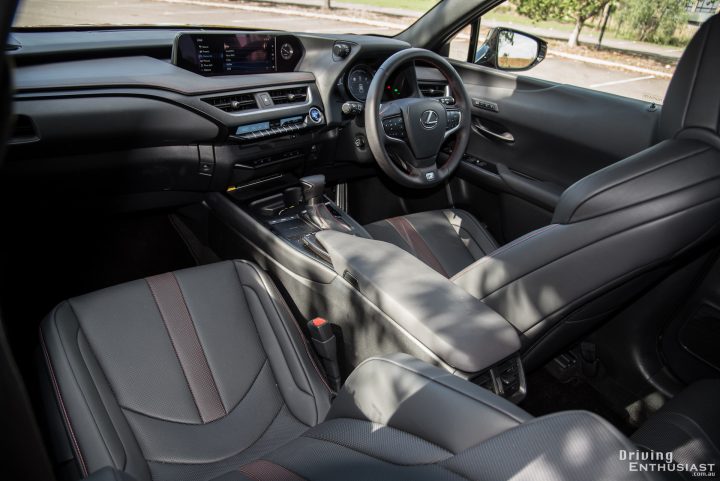 It’d want to come with all the fruit, and some vegetables and ever dessert, really, with a price tag that high. Fortunately, it does. Lexus usually does a good job of packaging, with very few bank-balance-startling options and add-ons ruining the buying experience. In saying that, you can get premium paint ($1500) and an Enhancement Pack 1 and 2 ($2500 and $5600). This test car has the latter, and the optional, in this case, Carnelian premium paint. So, if you walked into a dealership to buy this car you’d be looking at a starting point of $68,550, and that’s before on-roads. Pretty pricey, right?

As we said though you won’t miss any features here. This really does come with everything you could need from a modern, premium compact SUV. Firstly, there’s the F Sport pack. It infuses in unique exterior highlights including exclusive front and rear bumpers, front grille, and a set of dark 18-inch alloy wheels.

Inside, the front passengers are fondled by quite impressive bucket seats that are electronically adjustable and heated/cooled, with the driver turning and twisting a special F Sport three-spoke sports steering wheel. Up on the dash is a 10.3-inch LCD media interface with Lexus’s rather annoying yet totally clever touch pad controller on the console. 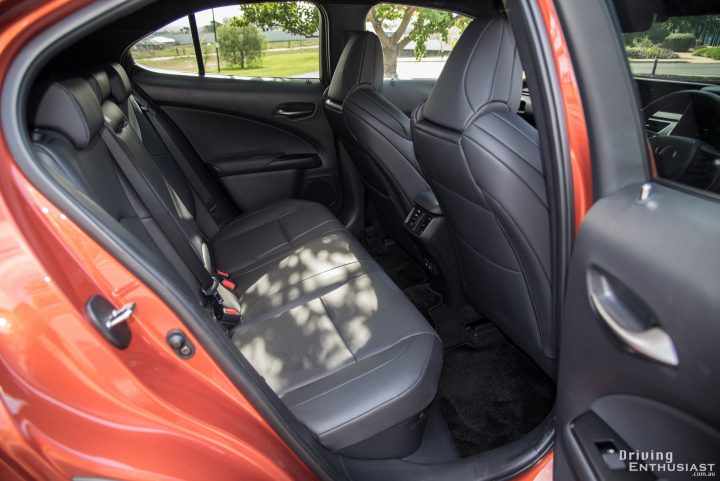 There’s another digital screen, measuring 7.0 inches, for the instrument cluster. We think the instrument cluster screen is something else. It looks really cool, and when you switch between the different drive modes the screen changes its theme to display sportier or cleaner gauges, depending on the mode.

You can easily seat two large adults in the front, partly thanks to the big bucket seats mentioned. Headroom is very generous for the class, and this is amplified by a low-ish seating position that almost makes it feel like a hatch more than an SUV. Rear seat passengers might complain a bit due to the limited legroom, depending on where the front passengers have their seats, and the middle seat is really only useful for children.

Also a bit useless is the boot capacity. In there you’ll find just 334L. If you forgo the AWD option it jumps to 364L. But neither of these figures are very appealing, even for a compact SUV. For comparison, the aforementioned rivals offer these capacities: Audi Q3 AWD (460L), BMW X1 AWD (505L), Mercedes GLA (421).

Overall the interior displays utterly faultless attention to detail and build quality, and you won’t be wanting for more features or gadgets or smart show-offy stuff. It’s all here. Whether it’s all worth almost $70k, we’re not sure. We’ll let the market decide. 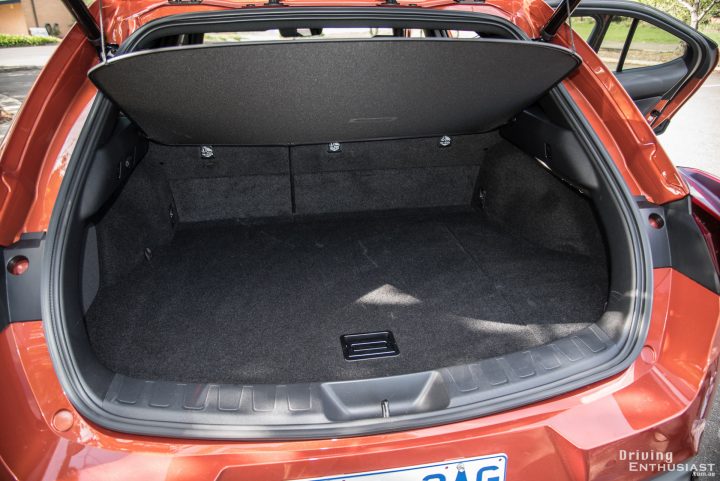 Look, this is a hybrid so it’s not going to provide hot hatch excitement in terms of acceleration. However, the handling is surprisingly dynamic. It manages to walk that perfect line between sublime ride comfort while presenting excellent body control and agility. Going for the F Sport gets you adaptive variable suspension too, so if it’s driving fun you want, this trim is a must.

Instead of offering eye-peeling acceleration the UX 250h can be fun in other ways. Economy driving is one of them. We averaged just 7.0L/100km during our test, and we tried really hard to get it higher than that. We reckon you could get a much lower figure in the real world.

Power comes from a 2.o-litre four-cylinder petrol engine that’s paired with an electric motor system. Combined, the system generates up to 131kW. This means it is technically the sportiest variant as it is the most powerful. But, this version is also equipped with the all-wheel drive option, which does add weight. Interestingly though, the AWD gear only sees the tare mass skip from 1600kg in 250h F Sport form to 1655kg for this AWD F Sport. 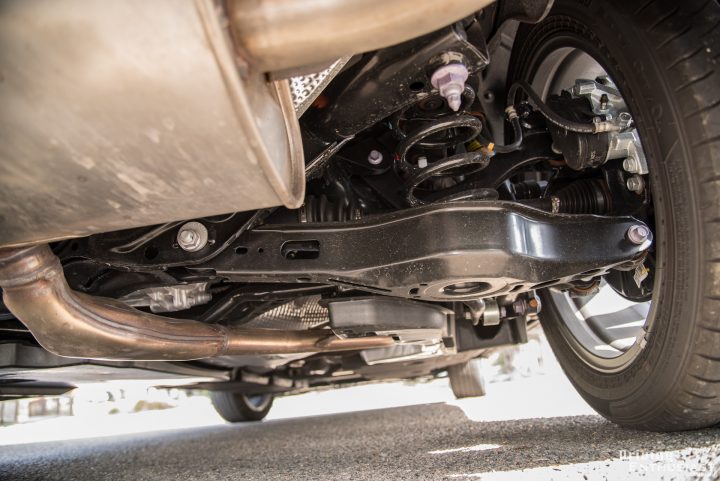 Do you need AWD? It depends. On initial thought you might have come to the conclusion that you’re never going to hit the off-road wilderness or encounter snow or tow a boat from a greasy ramp. Keep in mind though there are other benefits. Safety. Yep, AWD vehicles are almost always safer than their 2WD counterparts. That’s because in wet conditions the car is automatically more stable with power driving all four wheels.

On the contrary, the AWD option would be a little slower and it would consume a touch more fuel than the 2WD version. So, what sort of acceleration are we dealing with anyway? We timed a best 0-100km/h sprint in 9.6 seconds. As mentioned, it’s not fast but it doesn’t mean it’s not fun. 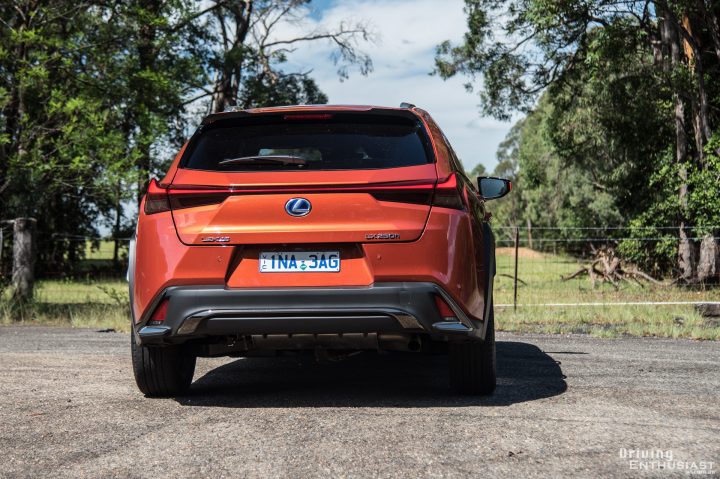 Since Lexus is owned by Toyota, and since Toyota holds perhaps the strongest reputation for quality and reliability in the auto industry, it doesn’t take a genius to conclude that any new Lexus is going to be even more of these things. And the Lexus UX 250h feels it. We’d be betting a lot of our money that these will run for years and years without so much as a hiccup.

If you are browsing the premium compact SUV market segment, you do need to have a closer look at the UX. By far the build quality, ride comfort, fuel economy, and clever in-car tech are the most attractive elements. We’d even go as far as saying the Lexus now holds the benchmark in these areas.

As a final piece of advice, we’d consider the UX 200 petrol version and in 2WD form, with the F Sport pack, as it will save you almost $10,000 (priced from $53,450). And you still get outstanding fuel economy; official average rating of 5.8L/100km versus this car’s 4.7L/100km. In this upper-spec form the value is not ideal, but most of the other variants offer great value for money compared with the rivals. 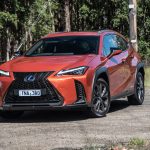 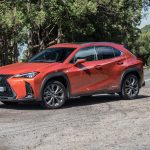 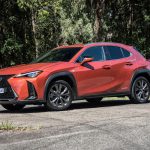 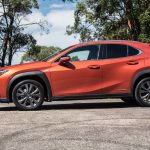 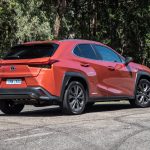 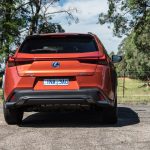 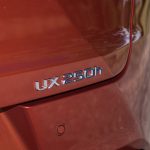 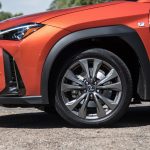 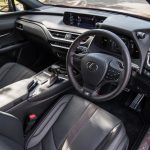 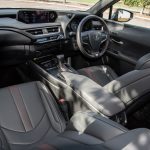 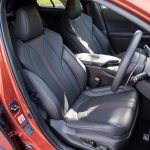 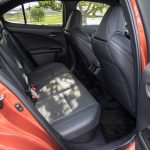 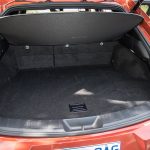 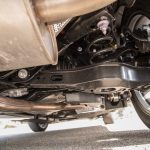 Lexus needs to be in this segment, so it’s great that it has finally come up with a product to offer. And we think the UX deserves a solid standing in this class. Everything about it is distinctly Lexus, carrying its own personality and not merely following the pack. This is the only hybrid for the class, and in F Sport trim, we think it looks sharp and very intelligent. Just don’t expect it to blow the segment out of the water with acceleration.