An image of the 2020 Porsche 911 Turbo ‘992’ has surfaced on social media, revealing the new beast for the first time.

The image was posted up by Instagram user t_schleicher, showing a rear view of the 992 911 Turbo as it rolls down what appears to be the production line. The image actually shows two different views, but on closer inspection it seems the lower image is just a mirrored version of the top image. 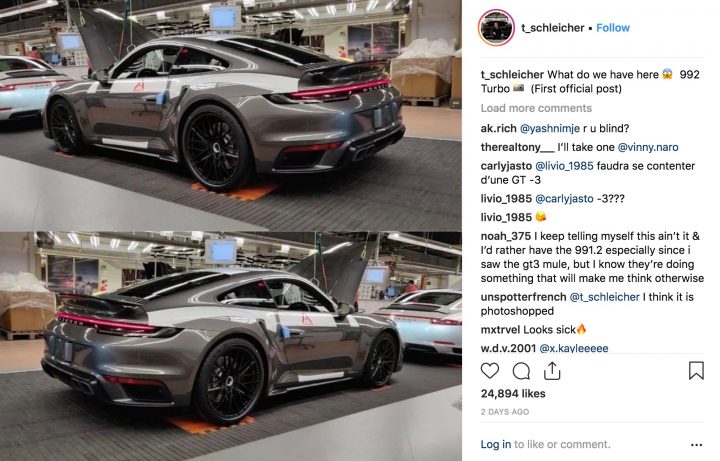 By the looks of it, the new Turbo will go for a more aggressive look than before. There’s a black rear wing which likely features a hydraulic adjustment, with a chunky diffuser lower down and the traditional intercooler air extraction vents behind the rear wheels.

It looks like Porsche is amping up the aero for the new version. Normally the Turbo is quite sleek and subtle in terms of the body design, but this example uses some exaggerated side skirts, in black (or carbon fibre?), as well as multi-spoke black alloy wheels with dished items on the back.

Details about the engine are still under wraps, but reports suggest the new model will feature a yet-further-tuned version of the legendary 3.8-litre twin-turbo flat-six. In its current form the 911 Turbo produces 397kW and 660Nm, or 427kW and 700Nm in Turbo S form. These figures could be taken beyond 450kW for the 992.

Judging by the fact this example is literally fresh off the production line, it seems Porsche is already finished with pre-production testing and all of that. So, a debut is very likely imminent. The Geneva Motor Show will probably be a good place to check it out first, starting March 5.