You may have heard of 3D-printed toys and little gimmicky objects. Well now it seems 3D-printed brake calipers are about to become a thing. How much of a thing? Does the name Bugatti mean anything to you?

Volkswagen Group has released a video onto the ‘Tube showing some testing of a new 3D-printed brake caliper design which is set to replace the conventional calipers on the Bugatti Chiron. Volkswagen Group is pushing big on 3D-printed parts and has set up a dedicated facility in Wolfsburg to test components made in the new-age technique.

So, what are we looking at here exactly? It’s a full, 3D-printed caliper made from titanium. The caliper is for the Bugatti Chiron. As part of testing, a special wheel hub dyno has been set up with a full-size disc with a 3D-printed caliper wrapped around it.

The engineers then take the disc/wheel speed up to 370km/h-plus, and then jam on the brakes. Speed is wiped off very quickly, with much of the energy transferred into heat. This is bad news for the disc, but it looks like water off a duck’s back to the caliper.

This is then repeated three times, just to make sure. By the third time the disc reaches over 1000 degrees Celsius. It glows red. But then it goes to an all-new level, shining so yellow it’s almost bright white, like the sun. Not something you’d want to touch, or get within 50 metres of, put it that way. 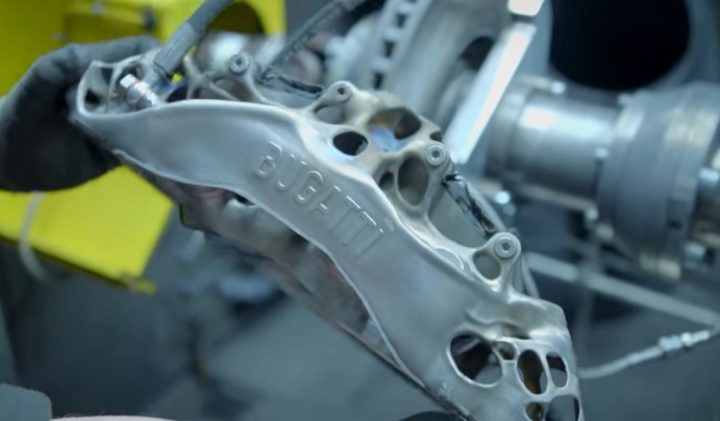 According to the video description the caliper is the largest titanium 3D-printed pressure functional component ever made. It’s also the first brake caliper of its kind. By the looks of the testing, it has no trouble handling the harshest of conditions.

The caliper takes around 45 hours to print, using special 400-Watt lasers that melt down titanium and then use the resultant powder to print 2313 layers. This sounds like a complicated process, and it is. But it’s like a giant printer in that, once it’s programmed, it doesn’t really need manual labour to operate.

Of course the biggest benefit is lightness. The high-tech manufacturing process minimises waste and is thus very light, and the technique is also extremely strong. And with titanium, which is already both of those things, the end result is a caliper that weighs around a quarter of the weight of the standard caliper.

If you see only a few more videos this year, this is definitely one to check out. Wait for that third test. The heat is extreme.