Looking for the awesomest way to dispose five sets of tyres in under 20 minutes? Ken Block has found a crafty solution, using around 3000-4000hp worth of cars.

Yes, it’s time for Ken Block Gymkhana Ten. Can you believe there has been nine videos between now and that very first Gymkhana video from 2008? For Gymkhana Ten it has to be the biggest and most extravagant version yet. It just has to be. That’s the way sequels work. Because if they don’t then it’s a failure.

Well, we can confirm Gymkhana Ten is definitely the biggest and most badass version yet. Ken Block incorporates five cars in the film, including some of his latest builds such as the ‘Hoonicorn’ all-wheel drive Ford Mustang, and the new Ford F-150, which is also all-wheel drive.

Unlike the Mustang, the pickup truck uses a modified version of Ford’s latest EcoBoost twin-turbo V6 that’s found in vehicles such as the F-150 Raptor and the new Ford GT. It also uses a custom tubular chassis and is completely stripped out and purpose-built for this sort of tarmac-tearing fun.

Also used in the film is a hardcore Ford Escort RS Cosworth – yep, that mouth-wateringly cool rally car from the 1990s with the twin rear wings. There’s also a 2018 Fiesta WRC car, on ice and snow, and Ken Block’s Rallycross Ford Focus. 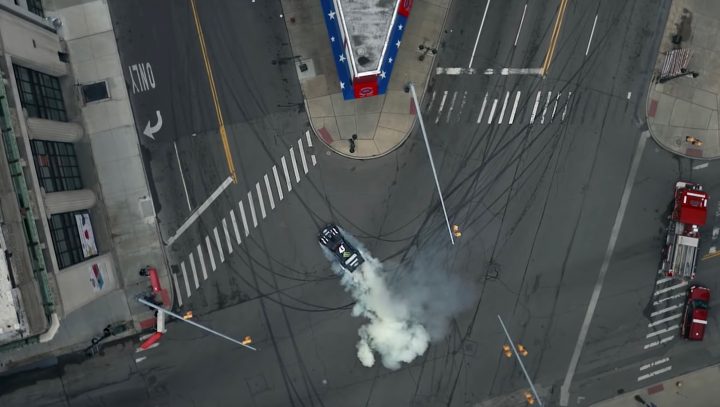 Ken Block pulls off some incredible stunts once again, including many of those crazy handbrake turns with the car rolling backwards as the tyres spin off their nut forwards, scrambling for grip with smoke pissing out. He also gets very, very close to a number of edges and sharp kerbs, and gets air over a cobblestone bridge in Mexico.

This is definitely one to check out. Instead of that crap you’re watching on TV, get this up onto the screen. Here it is below. We’ve also embedded the original Gymkhana ‘One’ beneath it to spike your memory.