Lister Lightning previewed, to be fastest SUV in the world

A highly tuned version of the Jaguar F-Pace SVR is on its way. Well, we say highly tuned but it’s actually classed as a production car, called the Lister Lightning. The latest teaser shows off its brakes – they look big enough to stop a moon’s orbit.

If you’ve ever played Need For Speed III: Hot Pursuit, the Lister name might sound familiar to you. The Lister Storm supercar was featured as an unlockable car. In addition to making its own cars, Lister is a renowned tuner of Jaguar cars, including a 200mph (322km/h) version of the XJS powered by a 7.0-litre V12. The Lister Thunder continues the meteorological nomenclature, as a hotter version of the Jaguar F-Type Coupe revealed earlier this year. 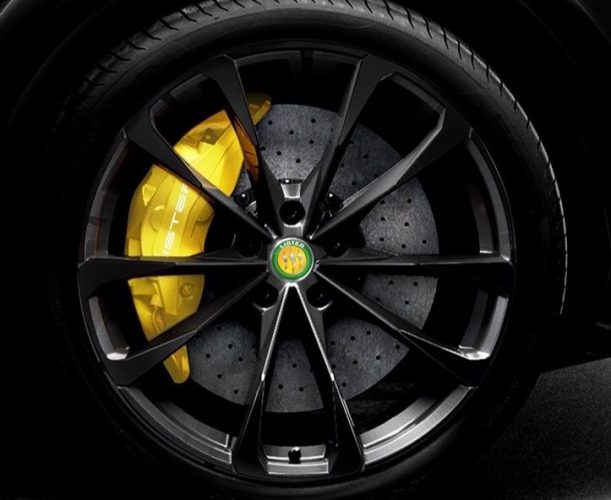 Naturally then, the Lister Lightning is an opportunity for the company to turn its attention to the burgeoning performance SUV category. It will up the ante of the already ballistic F-Pace SVR from 404kW, to a suspected 500kW. Accompanying the picture of a carbon-ceramic brake rotor, clasped by a yellow caliper of myriad pistons, the company proclaims: “When you are creating the world’s fastest SUV, it needs to stop as fast as it accelerates.”

Indeed. That quote suggests a top speed of over 306km/h, which is needed to eclipse the Lamborghini Urus for that mantle. Will it challenge the Jeep Grand Cherokee Trackhawk‘s 0-100km/h time of 3.7 seconds and 11.6-second quarter mile? You betcha. If you want to talk tuner cars though, it’s worth mentioning Hennessey Performance offers a 755kW package for the Trackhawk.

In an earlier teaser image (at top), we see the trademark green paint with yellow highlights works a treat, and the front end appears to have been spoiled to a more aggressive bumper and aero package. Nevertheless, we can expect to see the Lister Lightning make its official debut at the Goodwood Festival of Speed on July 12.

How good would it be to see this thing in a race against the Jeep Grand Cherokee Trackhawk, Lamborghini Urus, Bentley Bentayga W12 and Tesla Model X P100D? Bring. It.On!