Sports cars might not be the most popular vehicle segment, but some of the latest stuff that is coming out in Australia is highly tempting. According to VFACTS Australian car sales figures, all sports car segments combined attributed 27,311 sales to the overall 1,189,,116 new vehicles sold during the 2017. That’s just 2.3 per cent of new car sales. However, if, like us, you love driving then these are the cars you should be looking at. Here are our top 10 best sports cars currently on sale in Australia. We’ve tried to include a mix of different price points for you, but all are from the official VFACTS ‘sports car’ segments. (All prices mentioned exclude on-road costs, and correct at time of writing for Australia.) 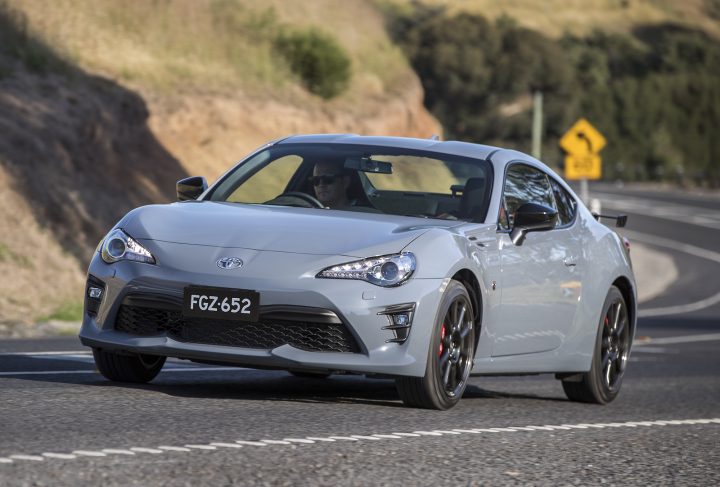 10. 2018 Toyota 86/Subaru BRZ
We can’t talk about modern sports cars without mentioning the Toyota 86. What a future classic this will be. It’s produced by Subaru in Japan and uses mostly Subaru components and panels, with Subaru selling an almost identical model called the BRZ. These two are all about raw driving pleasure. There’s a 152kW 2.0-litre naturally aspirated four-cylinder boxer engine up front. A six-speed manual transmission in the middle (or optional auto), and a tight rear-wheel drive system with a limited-slip diff at the back. Make no mistake, when you push this thing hard through the bends, it’ll reward you with fantastic balance and easily manageable drifting action. 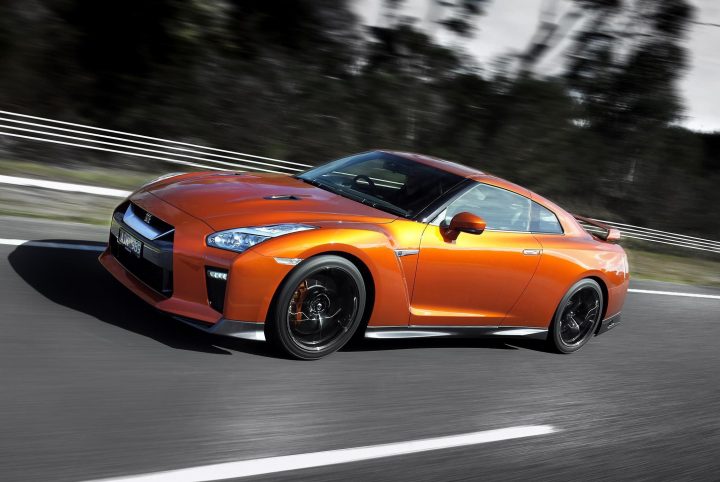 9. 2018 Nissan GT-R
Godzilla, as it’s known. The Nissan GT-R is a legend. And the latest ‘R35’ model builds on and evolves the pedigree wonderfully. Sure, it no longer uses a screaming inline six engine, instead making do with a 3.8-litre twin-turbo V6. However, with a peak power of 419kW and peak torque of 632Nm, this is one insane machine to drive. The clever, rear-biased ATESSA all-wheel drive system helps propel the coupe from 0-100km/h in a claimed 2.7 seconds. That’s a ridiculously quick time for a four-seat production car. And then in between the corners, it claws at the tarmac like a tiger sprinting for its prey. It also looks imposing, and always attracts crowds everywhere you stop. About the only real downside is the price, which, in Australia, starts from an eye-watering $189,000. 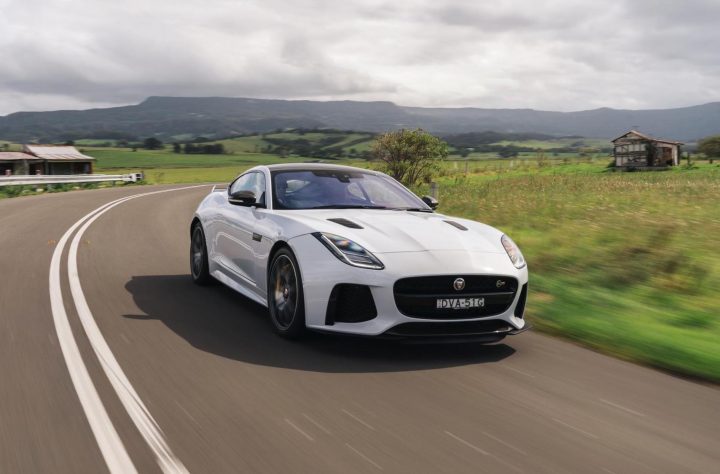 8. Jaguar F-Type
It’s one of the sexiest cars alive at the moment. Jaguar’s F-Type is designed to pay homage to the iconic E-Type of the 1960s and ‘70s. It has similarly seductive hips that lead into toned rear haunches, with a sharp and focused face and beautiful proportions. What’s it like to drive? Excellent. In short. You can get it with a 250kW supercharged V6, or a 280kW version in the S, or a 375kW V8 S, or a 404kW R, or a 423kW SVR. Take your pick. Our favourite is the 280kW V6 S. It has just the right amount of power to enjoy lots of tail-out sliding, but not too much power that it wakes up all the neighbours, and destroys the tyres on every turn. 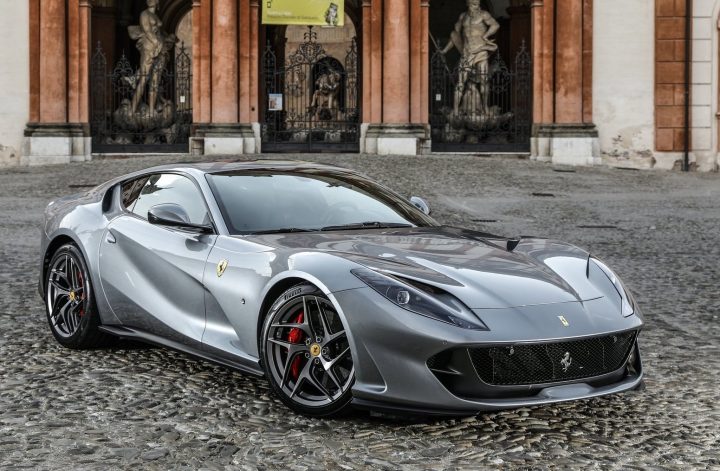 7. Ferrari 812 Superfast
It’s called Superfast for a reason. Under that long, elegant bonnet you’ll find Ferrari’s most powerful, naturally aspirated, non-hybrid production engine it has ever made. The 6.3-litre V12 produces an almighty 588kW and 718Nm, with acceleration across 0-100km/h taking just 2.9 seconds. We can imagine there might be some issues getting the power down, as this bad boy is rear-wheel drive only. As you might have expected, all of this doesn’t come cheap. Prices start at $610,000. 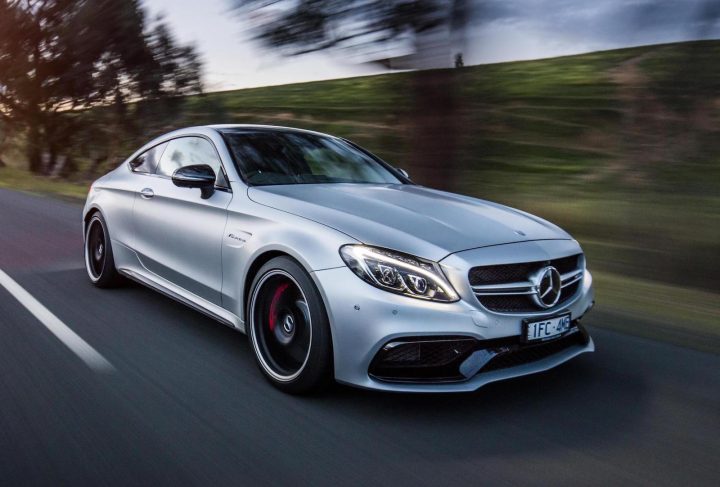 6. Mercedes-AMG C 63 S Coupe
It’s one of the most powerful cars in the class. With a 4.0-litre twin-turbo V8 that belts out a monstrous 375kW and 700Nm, this beast will accelerate from 0-100km/h in a claimed 3.9 seconds. That’s seriously quick. And all wrapped up in Mercedes’s latest C-Class body means it is agile, focused, and extremely competent in the bends or blasting down the motorway. Being a product of AMG means it comes with all of the bells and whistles you can muster, including massive brakes, a bodykit, and flashy interior with bucket seats. 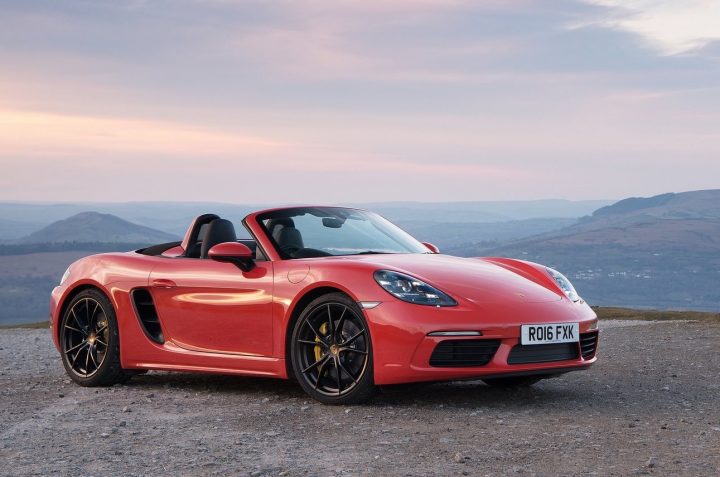 5. Porsche 718 Boxster/Cayman
It might be the most affordable model Porsche sells, but it ain’t cheap on thrills or driving pleasure. Pop the roof down in the Boxster, pen out your entire weekend, and let the steering wheel and pedals take you into another world. Along a nice mountain road or coastline route, the Boxster and Cayman are absolutely perfect. For the latest model Porsche has ditched the perhaps better-sounding flat-six engine and replaced it with a new turbocharged four-cylinder boxer unit. Power and torque are mostly higher than the predecessors, especially the torque, and fuel economy is even better. Power outputs span from 220kW for the 2.0L base model and soar up to 257kW for the 2.5L S. 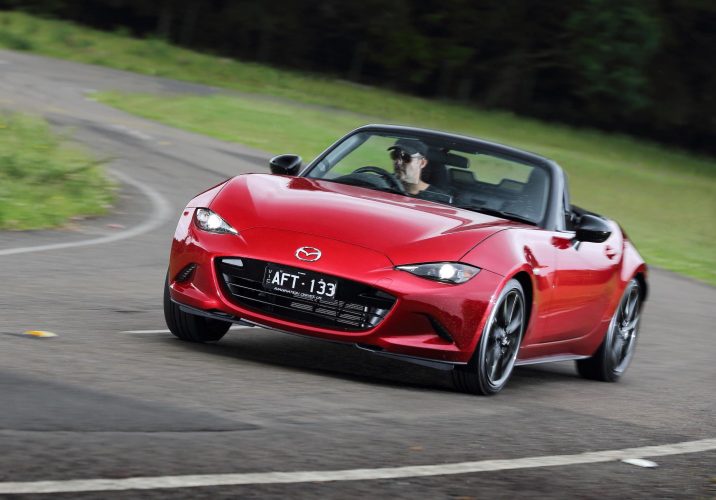 4. 2018 Mazda MX-5
Mazda’s MX-5 is one of the most iconic sports cars ever. Probably one of the most iconic cars, too. You immediately know what it is when you see it coming. For the latest ND generation Mazda has gone back to its roots. This is all about lightness and driving agility. You can feel everything through your fingertips, and slot away gears through the superb gear shift action. With rear-wheel drive, it’s easy to kick the tail out. But even if you’re not a drift master, the MX-5 is so playful and forgiving, it really is fun for all experience levels. The latest version is also well packaged, coming with Mazda’s flawless MZD Connect multimedia screen inside, with options like a Bose stereo and retractable hardtop roof (called the MX-5 RF, review here) also available. 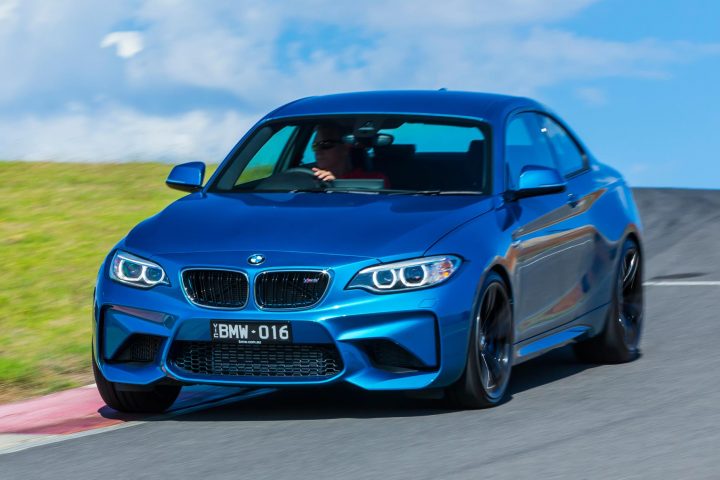 3. 2018 BMW M240i/M2
BMW’s best sports car used to be the M3. But now that’s a sedan, with the M4 taking the coupe and convertible’s place. Interestingly, we and most experts will recommend the M2 over either of these. At least in the latest generation. The M2 is just as rewarding to drive, yet it is not as touchy or intimidating. The turbocharged inline six produces a deep roar that turns into a savage bark and then wailing scream the higher you rev it. Like the M2, the M240i is rear-wheel drive and features a turbocharged inline six. Aside from the M2 being a proper M car with M-developed suspension and steering, the M240i is a great starting point for serious drivers. Power levels are almost neck and neck, with the M240i developing 250kW against the M2’s 272kW. We’ll take either, but if you can stretch the extra $20k or so, go for the M2. 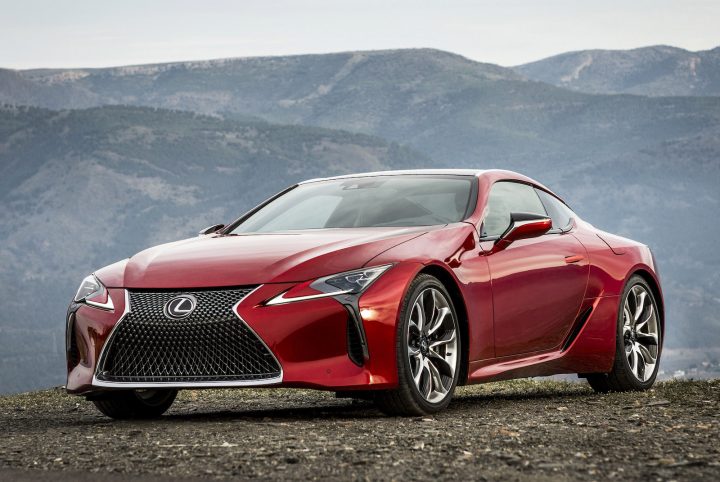 2. Lexus LC 500
This is one most underrated cars of 2018 in our opinion. Yes, it looks absolutely superb. Like, Lexus has really nailed it with the design. In the metal it looks elegant and expensive, from every angle. But, to your surprise, it actually drives as good as it looks. The LC 500 uses Lexus’s fantastic 5.0-litre V8 producing 351kW, matched up to a rapid-firing 10-speed automatic transmission with rear-wheel drive. And the soundtrack? It’s amazing. Check out the video below we found on YouTube, which demonstrates nothing but the LC 500’s sound. Glorious. Even the interior oozes quality and Japanese craftsmanship.

1. Lamborghini Huracan
In our number one position is the Lamborghini Huracan. We love this car so much. The sound of the 449kW 5.2-litre naturally aspirated V10 literally sends chills down your spine. It’s incredible. And the power and response it offers is out of this world. And best of all, it is so easy to drive. It rewards experienced drivers with its precise steering and moveable rear end, while beginners can give it a good thrash and not get into too much trouble. For the young at heart, Lamborghini offers a rear-wheel drive variant too, so you can drift this Raging Bull. 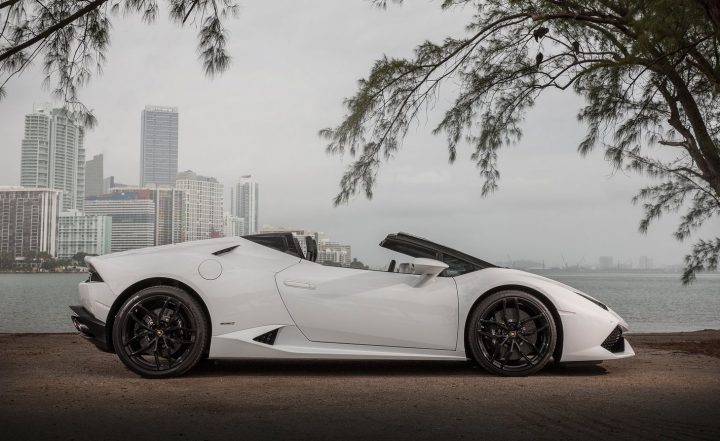