Do you want nothing but the most powerful SUV currently on the market? Well here it is. It’s called the Jeep Grand Cherokee Trackhawk, and it is literally the most powerful factory-built SUV you can buy in Australia. 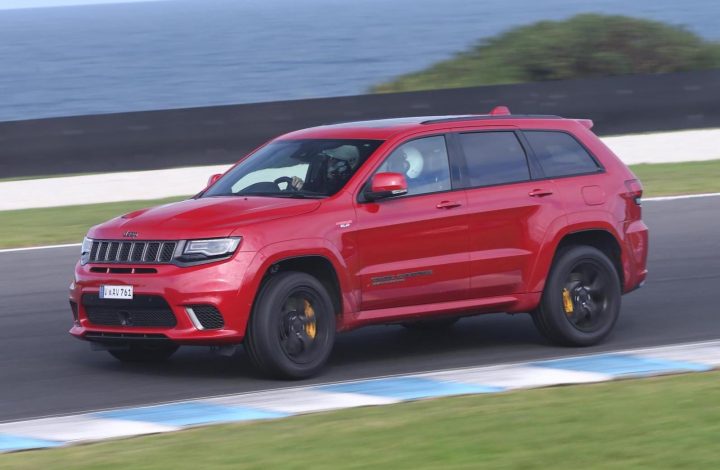 How much power does the Trackhawk have? Its 6.2-litre supercharged V8 develops a colossal 522kW and 868Nm. This is enough to demolish 0-100km/h in a claimed 3.7 seconds, with the quarter mile coming up in a claimed 11.6 seconds. As for the top speed, that’ll be 289km/h.

With these figures it’ll come as no surprise the Jeep Grand Cherokee Trackhawk is one of the very quickest and fastest SUVs to ever hit the Australian market. About the only vehicles that get close are the Bentley Bentayga W12, which is capable of just over 300km/h, and the Tesla Model X P100D which covers 0-100km/h in a claimed 3.1 seconds.

This really is a beast of a vehicle, and one that probably shouldn’t have passed through today’s ever-tightening anti-fun rules and regulations – which makes it even more cool. Check out the massive 20 x 10-inch alloy wheels. These are wrapped in 295/45 tyres at all four corners. Pirelli actually had to develop bespoke hoops for the Trackhawk to manage its 2399kg weight and enormous power.

As you would expect, the Jeep Grand Cherokee Trackhawk comes with loads of standard features and high-performance, track-developed components. There’s a set of brakes measuring 400mm on the front and 350mm on the back, with six- and four-piston Brembo calipers, respectively. There’s also Bilstein sports suspension doing the job of making sure the beast doesn’t fall apart when it comes to cornering. 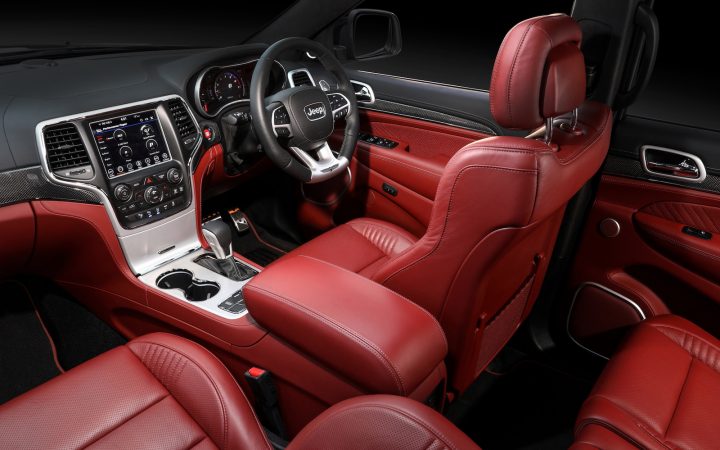 Inside is as luxury as you’d expect from the top-of-the-range Grand Cherokee. You get lashings of leather for the seats and parts of the dash and console, while the dash’s show piece is a massive 8.4-inch Uconnect touch-screen media system. This system does everything, from connecting to your phone to offering something Jeep calls Performance Pages. These pages can show you heaps of data, including live acceleration sprints and real-time g-force figures.

Being a Jeep, off-road capability remains present. Actually, we’re not sure how far those bespoke Pirelli tyres will get you but there is 218mm of ground clearance to help with off road driving, with Jeep’s Quadra-Trac on-demand four-wheel drive system managing traction. This technology gives the driver a range of driving modes to select from to make life easier.

Jeep Australia has already sold out the first allocation of Trackhawks, 62 in total. But, the crazy machine is on sale and punters can place an order today. Prices start at $134,990 (excludes on-roads), which isn’t bad considering the mental performance. Check out the video below to see how she sounds and goes across 0-150km/h. 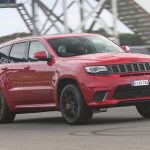 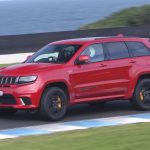 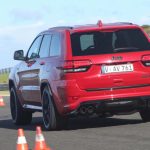 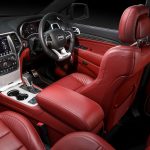