Audi engineers are currently putting the next-gen, 2019 Audi RS 7 through its paces at the Nurburgring, testing prototypes before it arrives on the market next year. 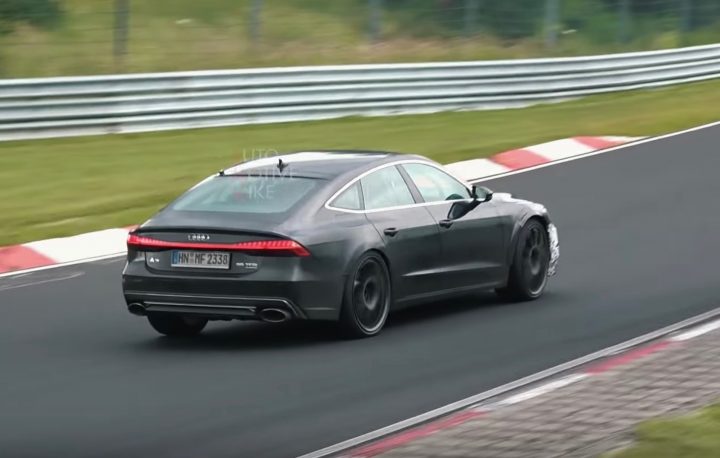 The new A7 has only just debuted, which means this RS 7 version might be a while off yet. This prototype doesn’t appear to be wearing much camouflage, however, being a test mule, it could be wearing a makeshift body with only the powertrain and driving components under the development at this stage.

According to reports the new RS 7 will come with VW Group’s latest 4.0-litre twin-turbo V8 that’s used in a plethora of vehicles, such as the Lamborghini Urus SUV and some Bentley and Porsche models. Power is expected to peak at around the 480kW mark. At this sort of power level we should anticipate impressive things on the tarmac.

There is also the chance Audi could borrow a new hybrid system that debuted in the Porsche Panamera Turbo S E-Hybrid. In that you’ll find a 4.0-litre twin-turbo V8 matched up to an electric motor system, providing a combined output of 500kW. That should definitely scare most of the rivals away.

Other cool highlights to look out for on the production model should include a pumped out body with muscular wheel arches, aggressive aero fins and vents in the front end, a finned diffuser at the back, and a set of large alloy wheels that hide some seriously eye-popping performance brakes.

Like the regular (new) A7, the next RS 7 will adopt the VW Group MLBEvo platform. This gives the new model a wheelbase that’s 12mm longer, while shortening the nose-to-tail length by 5mm, cutting 3mm from the width, and adding 2mm to the overall height. Of course, the extended wheelbase opens up passenger space for a more comfortable environment.

In the video below, provided by Automotive Mike YouTube channel, we get to hear the RS 7 at full noise as it’s hurtled around the famously demanding German circuit. Check it out below. The official unveiling isn’t likely to take place until much later this year or early in 2019.