We’ve all be waiting for a proper Toyota 86 performance variant to come along. And here we might have spotted the makings of such a car. 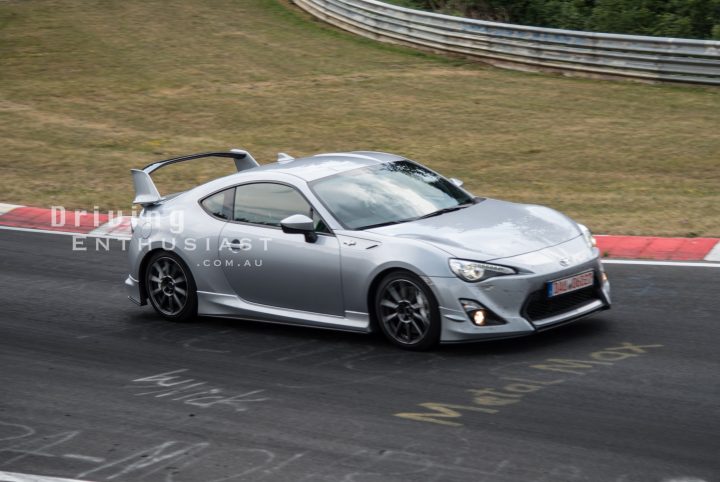 The car was seen during a normal industry testing day scooting around the Nurburgring with plenty of other prototypes. Sometimes manufacturers will send out production cars for apprentices and for training purposes during these days.

However, this Toyota 86 seems a bit different. Obvious is the fully hectic bodykit, with a massive rear wing. These parts are probably already available if you dig deep into the TRD or Modellista catalogues in overseas markets.

The element that spiked interest for us is the evidence of twin-piston brakes. Although a pretty crappy photo (our bad, sorry), you can clearly see the chunky caliper on the front. The standard 86 comes with regular single-piston items, mainly because it doesn’t necessarily need uprated brakes due to the lightness and relatively gentle power available from the engine.

This potentially spikes some further interest. Is there a tuned engine under the bonnet? Heavens forbid, a turbocharged engine? As firmly crossed as our fingers are in regards to such an idea, we doubt a turbo is on the way.

Standing trackside, the prototype (or whatever it is) sounded pretty normal to us. We’ve revved the clapper out of the regular model plenty of times and it sounds pretty bland, albeit with the trademark roughness of a boxer engine. And that’s what this sounded like.

At minimum Toyota might be testing some in-house enhancement parts for the Toyota 86 as some final tempters before the all-new model is expected to arrive in the next few years. We’ll have to wait and see. Feel free to tell us what you think in the comments section below.